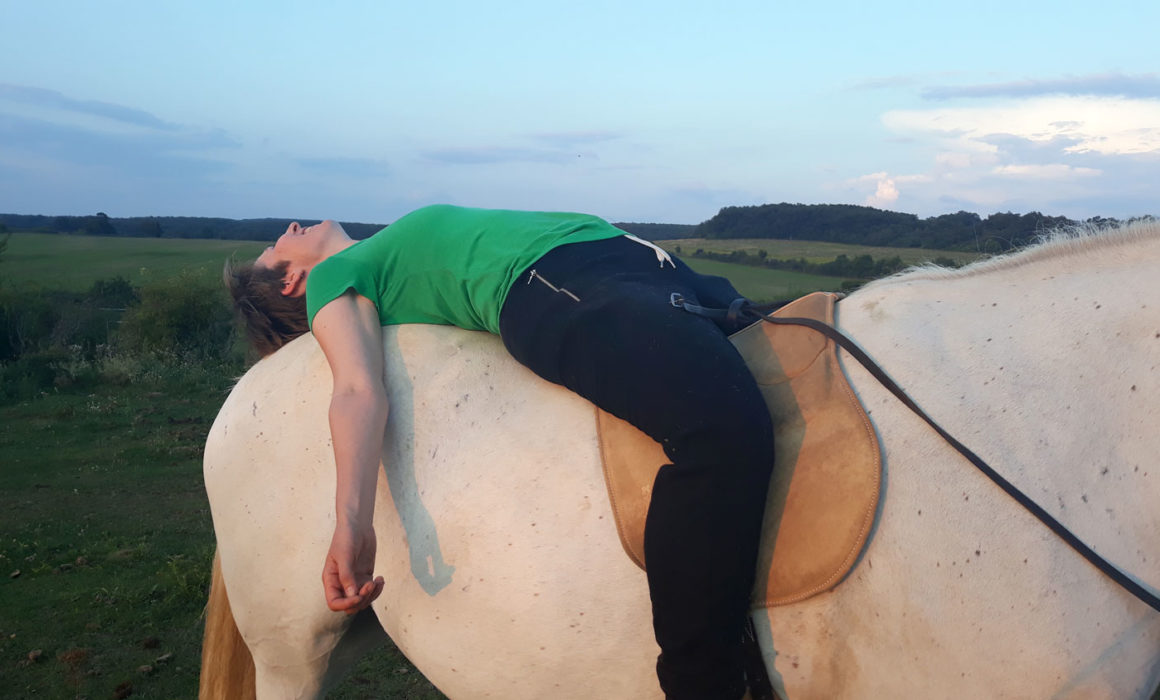 Above: Me laying back on Arabell the horse. Photo by Beáta Veszely.

Last August I spent two weeks at the Horse and Art Research Program in Barnag, Hungary. Barnag is a small village near Lake Balaton, about two hours from Budapest. The program is the creation of Beáta Veszely and Marton Szmercsanyi and it brings together of artwork and horsemanship. You can learn more about HARP  here. The residency takes place on a farm where Beáta and Marton train horses and riders, and teach and practice traditional Hungarian horse archery.

There were three residents in my session, including me. Originally there were supposed to be six of us, but at the last minute, plans for three of our compatriots changed. Georgia, Lara and I were the three who made it. We lived and worked closely together, sharing a large yurt to sleep in as well as communal kitchen and workspaces. Our days varied, but generally we had a block of time for artwork, occasional field trips, time to work with horses, lunch together, archery instruction, and the odd nap in the heat of the afternoon. Some evenings we gathered to watch movies about the academic art of riding or to share our past work. Beáta and Marton were involved throughout, sharing their love of horses and knowledge of art and the Balaton region.

Because I traveled so far to attend HARP, most of the works I made while I was there are small watercolors or drawings. I often made gesture drawings from watching the horses, or horses and riders, and then created more finished works from them in watercolor. This was a fruitful way of working for me, and a method that I continue to use. During my travels, I also began to make paintings of myself experiencing things, such as laying back on Arabell the horse, creating from what I remembered feeling in the moment, rather than from looking at something. This also is a practice I am continuing now that I am home.

As a group we did a collaborative performance with Arabell the horse. The sparks for this came from the prior year’s print of Arabell, my large gestural drawings of people and animals, and Beáta’s inspiration. We created a charcoal wall drawing of Arabell by tracing her multiple times as she stood near the wall in the common room. She moved gently and we captured the movement quickly. We performed this for an audience during our show at the end of the residency. 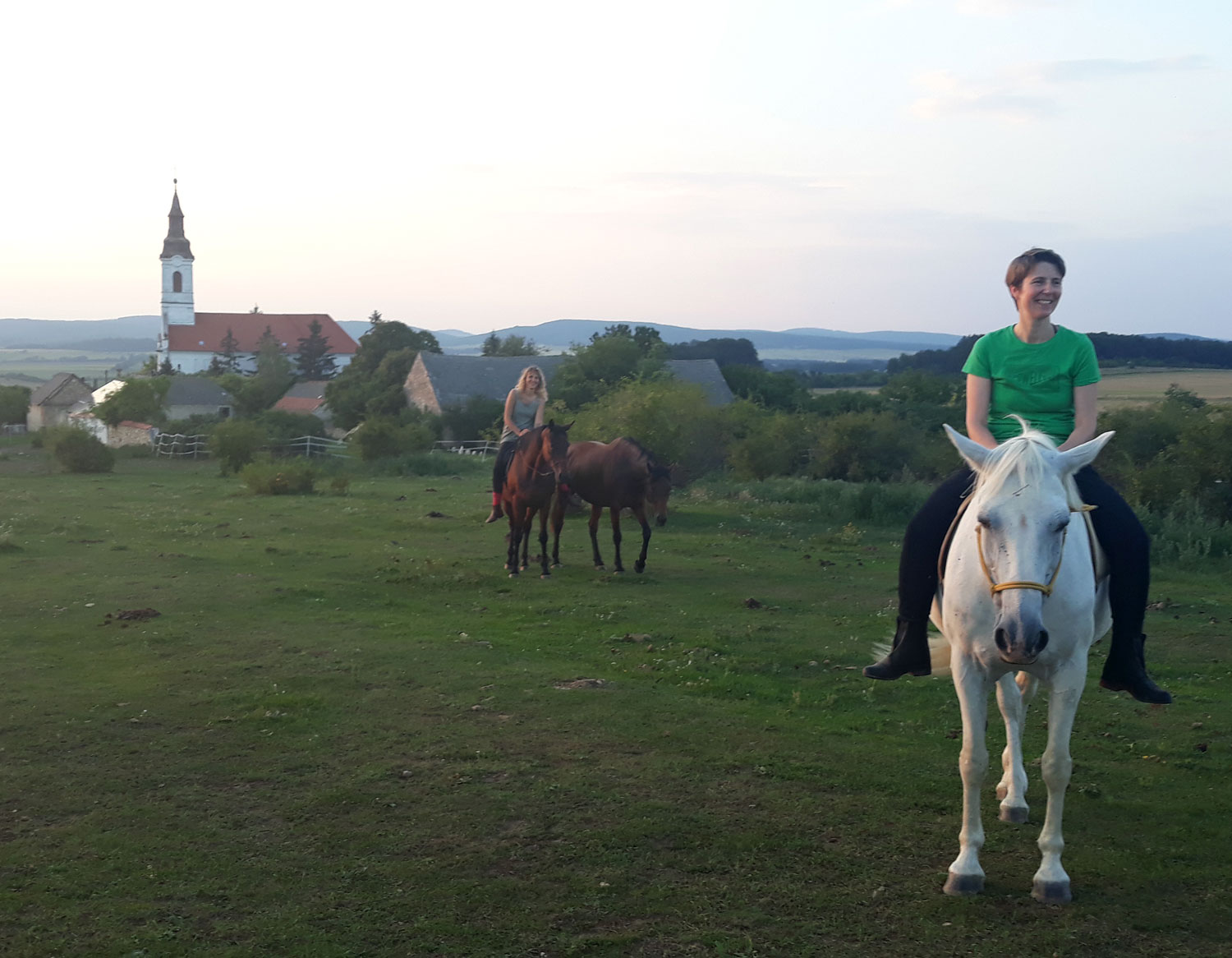 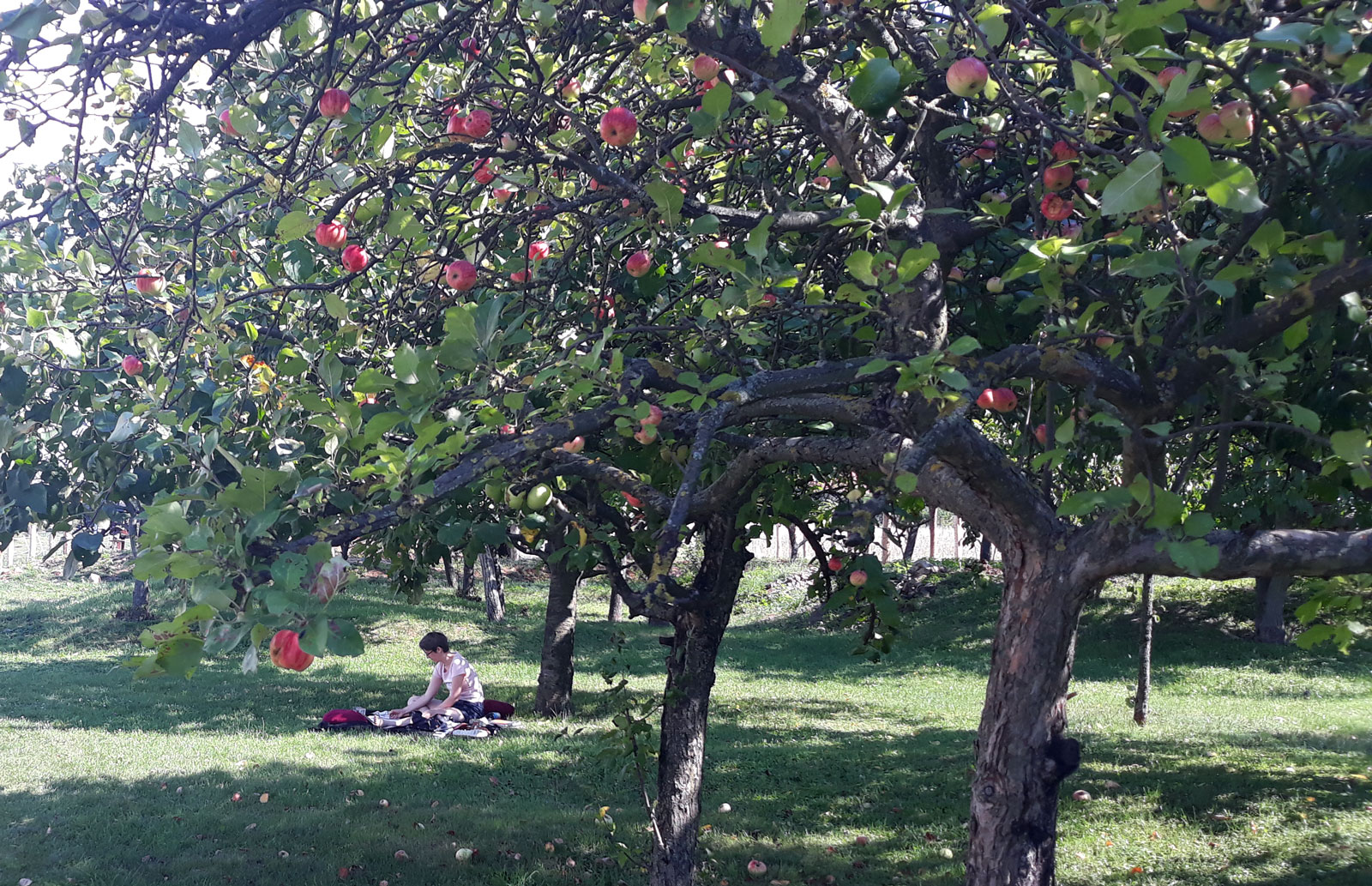 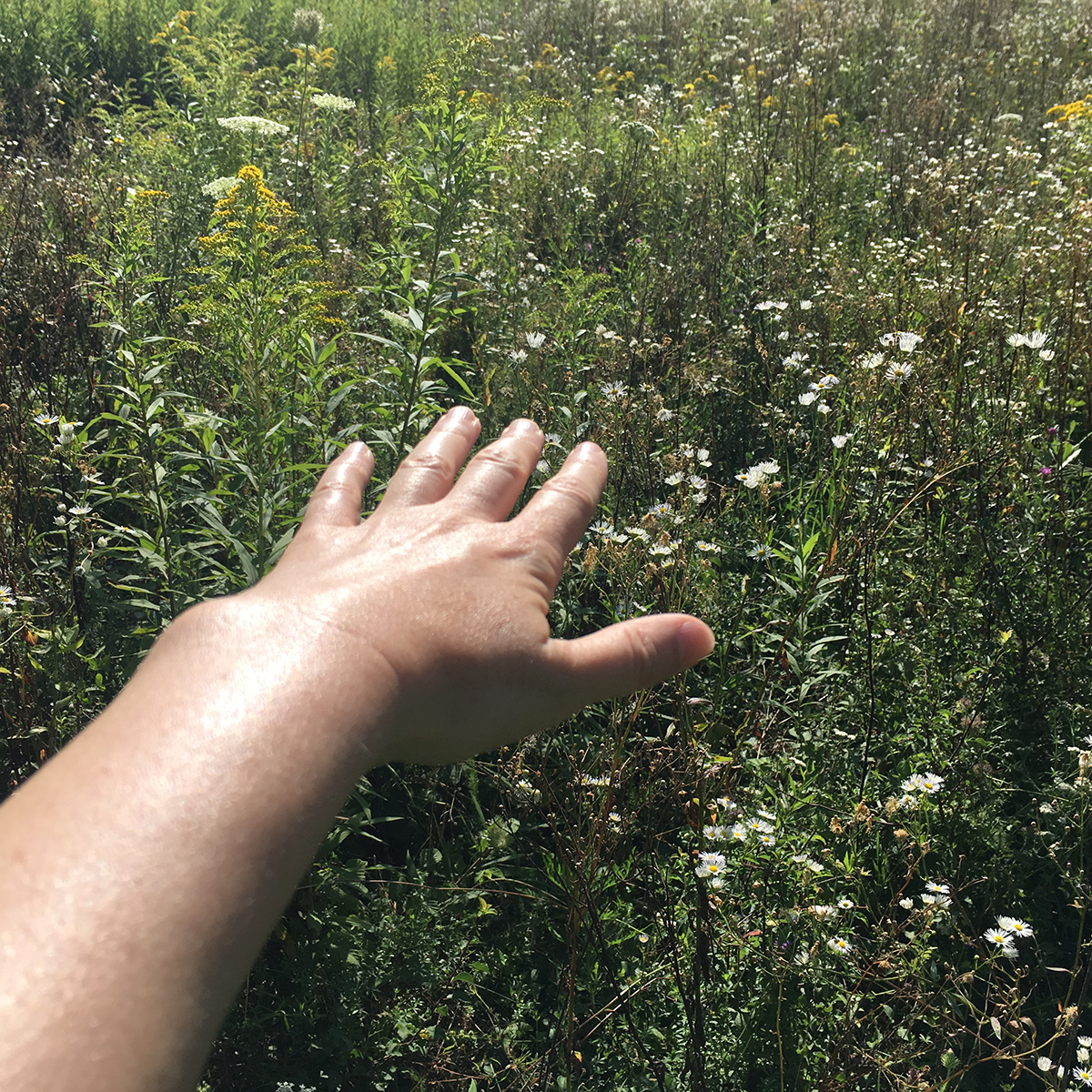 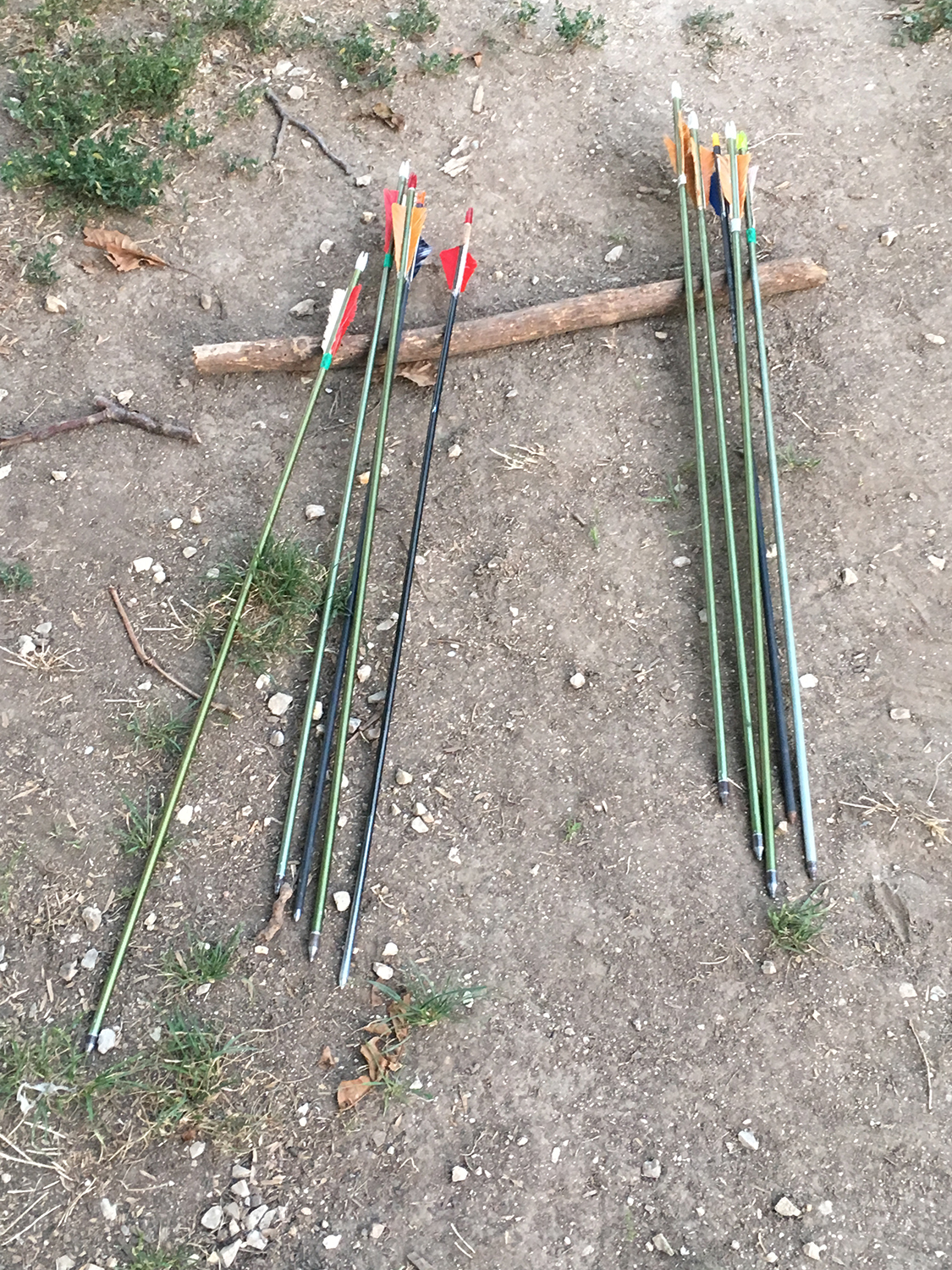 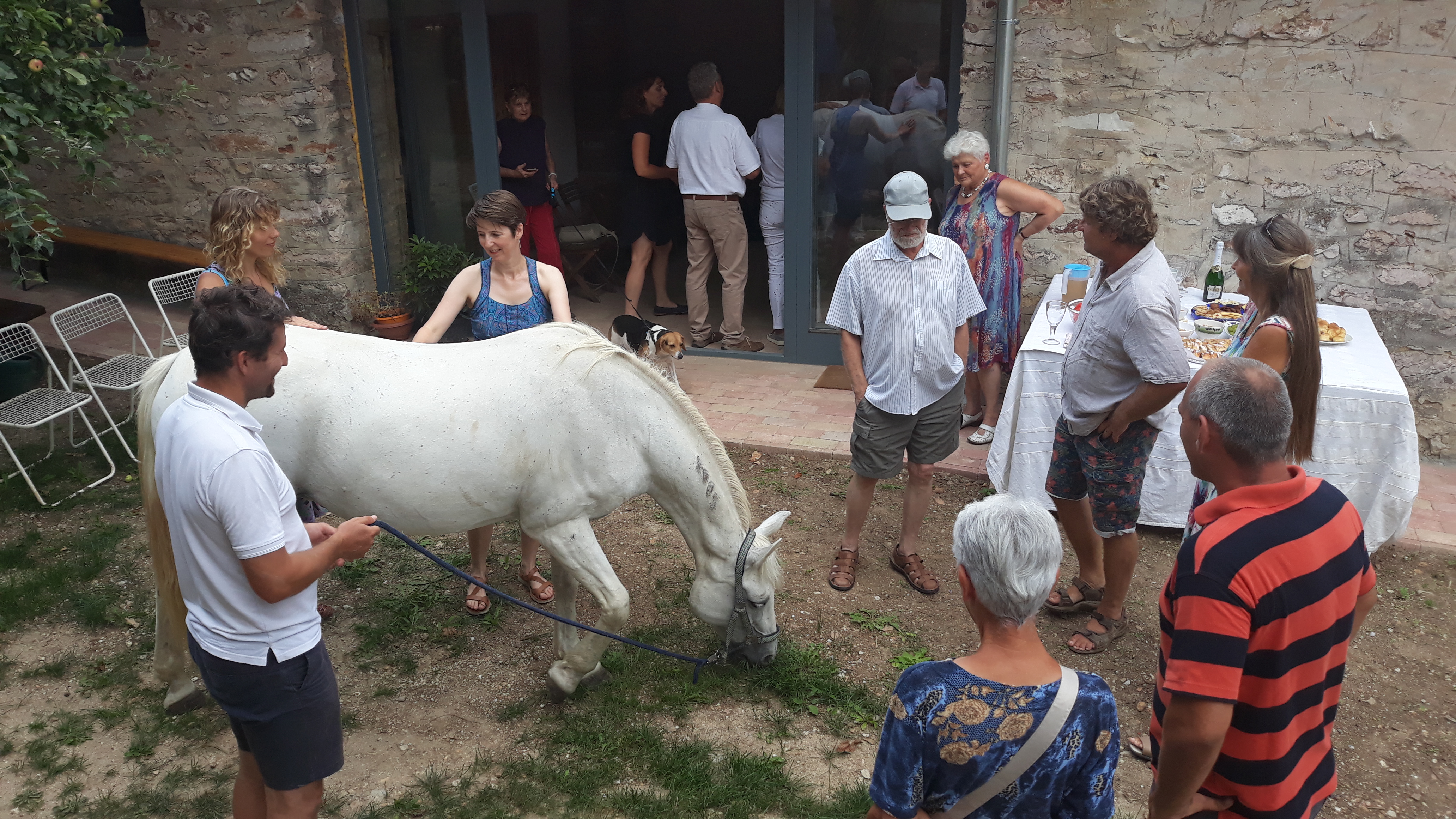 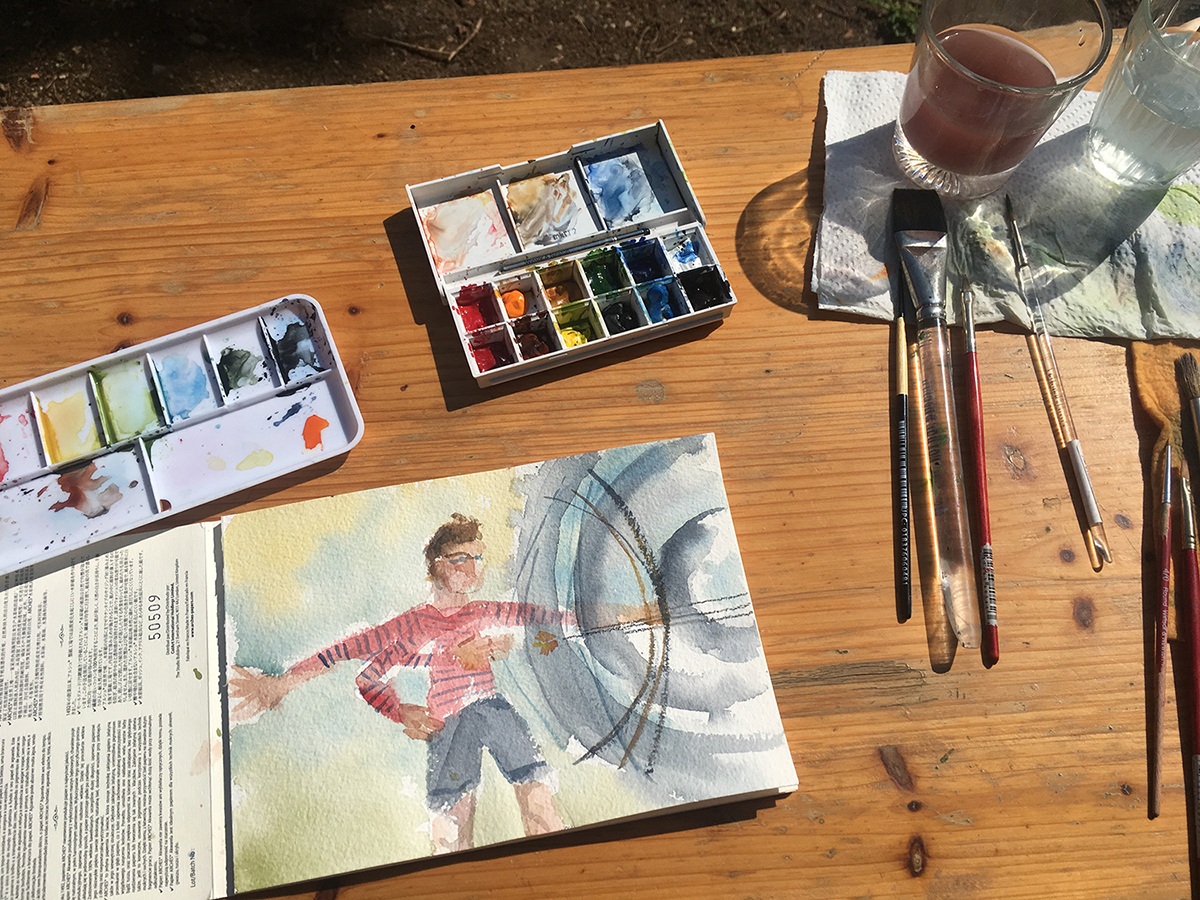 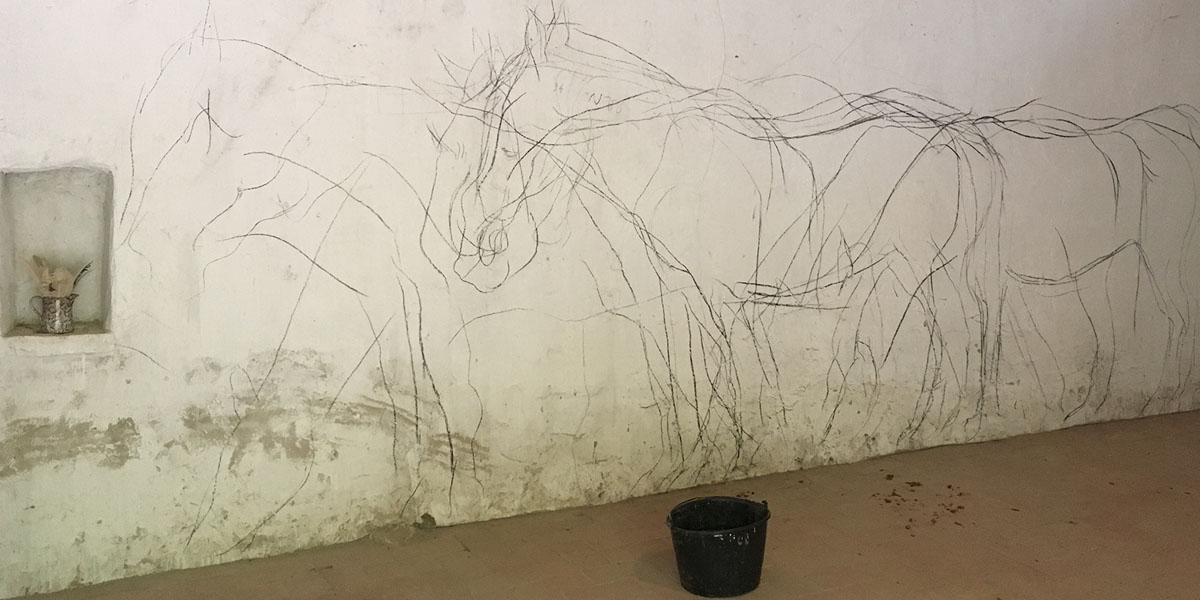 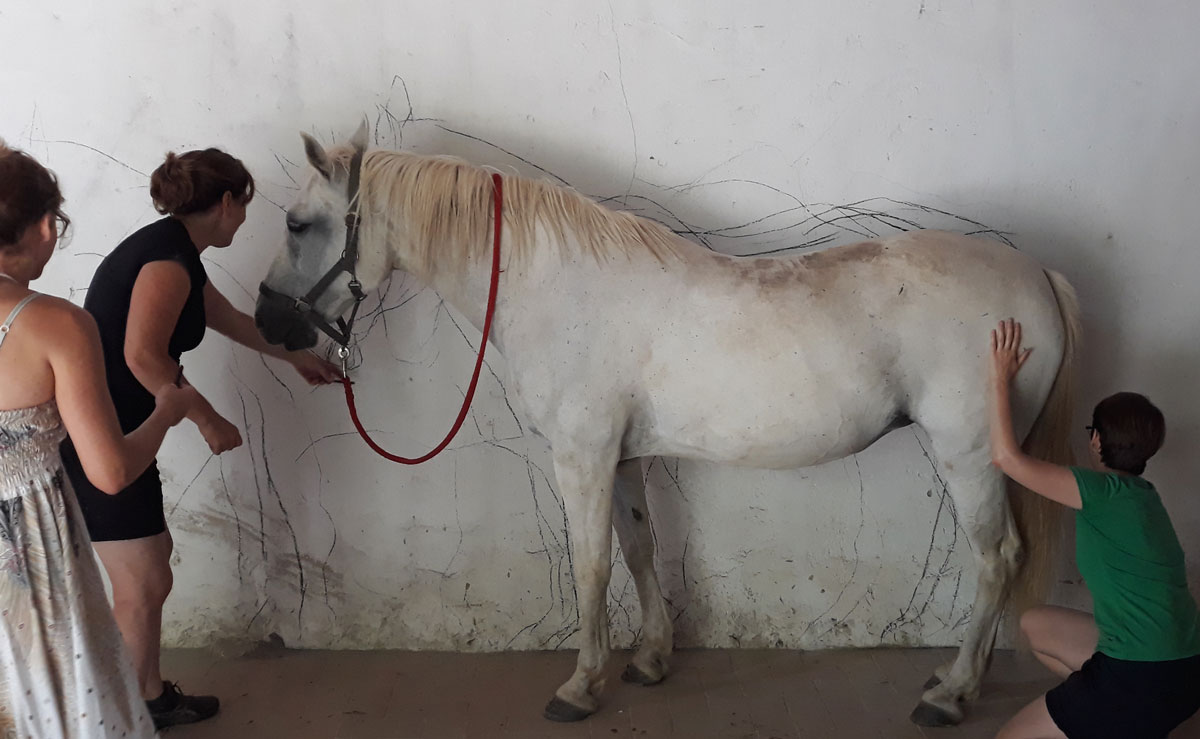 The afternoons in August in Hungary are very hot. In the evenings, one it cooled off, we worked with the horses. I have no formal training with horses, but do have experience with them from spending time with my aunts and their horses as a child. Still, I was pretty nervous around them in the beginning, I was a child a long time ago.

Beáta and Marton led us in basic exercises of natural horsemanship. In this method, we walked with the horses first, to establish a connection. The horses wore bridles, but did not have a bit. And, we generally used only a saddle pad—no saddle or stirrups. We were taught that the most important way rider and horse communicate is with the seat, all else is secondary.

At the end of the first evening of riding the horses, Marton instructed us to lay back. I had seen this in some of the videos they showed us, but I was nervous to do it myself. But, I did it. And it was wonderful to feel Arabell under my back, to let go and trust her. When I asked Marton what the purpose of that had been, he said “for you, you didn’t think you could do it.” He was right.

Most evenings I worked with Arabell, who is a gentle and patient horse. However, I did not fully master communicating well with her. I always was hesitant, asking rather than telling her to do something. This was not a very successful way for us to work together. I felt we had a relationship of mutual annoyance—she was annoyed with me because I did not say resolutely what to do, and I was annoyed with her because she did not do what I asked her to do.  Still, I enjoyed working with her and through the lessons, I became much more comfortable with horses than I had been when I first arrived at HARP.

The first afternoon at HARP we watched Beáta and Marton train in horse archery with their group. They rode a track that passed a rotating target. Each mounted archer cantered down the track, both hands occupied with bow and arrows, and fired as many arrows as they could into the target. They began firing as they approached and rotated in their seats as they passed the target, firing for as long as it was physically possible to aim at the target. It was very impressive. While watching them practice, I drew, capturing gesture drawings of the way they worked.

We learned the basics of archery while at HARP. Lara first taught me as she had learned the previous year. I can’t say I was a natural at it, but I enjoyed it a great deal. Beáta gave us more instruction over the course of the residency, enough that I bought a bow to take home and I was able to shoot from horseback on the last days at the farm.

Beáta and Marton are affiliated with Kassai Lajos “the creator of the modern version of horseback archery” and have worked and trained with him extensively. Late in our residency, we spent a day at The Valley, Kassai’s headquarters. The day began with a show performed by the young people who had just completed their summer training. This was followed by a large, family-style potluck meal and an afternoon of training for the adults. Georgia and I spent the afternoon watching the training, visiting with the horses on the farm, and practicing with our own new bows.

Each morning the horses were let out of their paddock to graze in the fields. For the first few days, after breakfast, I went in search of them. The fields were large, with a copse of trees running lengthwise through them. The grasses were high and filled with bugs and flowers and sticky burrs that got caught on my pants and socks and in the horses’ manes. The horses roamed far and wide. When it was clear I wouldn’t find the horses and get back on time for our next activity, I stopped where I was and made drawings of what I saw right there.

When I went on my own, I was never successful at finding the horses in the time I had. But, I loved walking out in search of them. Each time I went, I got better at finding the pathways the horses made. And walking was much easier when I traveled on one of their paths. The fields were a gentle uphill away from the farm, and walking up there provided a view of the valley we were in. I could see the steeple of the Catholic Church across the road from the farm, as well as far away hills on the other side of the valley. It was quiet except for the buzzing of the bugs.

After a few unsuccessful missions, someone suggested I follow the horses out in the morning. A few days later, they were released to the pasture a little later than usual, and I followed them.

At first I gave them a lot of space, drawing from far away. As I got more comfortable, I edged closer, they were aware I was there as I drew nearer. One got curious and came to check me out. She nuzzled me in a friendly fashion, and stayed close. The rest of the group started to drift towards me. And then, suddenly, all six were right around me. I got nervous then, what would I do if they all wanted to nudge me at once? I knew they wouldn’t hurt me, but after a few minutes I went in from the fields.

Sleeping in the yurt was quite comfortable. We each had plenty of space, a thick pad to sleep on and extra pillows and blankets, left by previous residents, to use. The first night we were there, in the early morning hours, a major thunderstorm rolled over the farm. It crashed and banged and rained hard. The yurt lit up with lightning. I lay there, exhilarated by the storm and nervous. Was a yurt a safe place to be? But, leaving the yurt and crossing the yard to the buildings did not seem like a good idea, so I stayed in bed and hoped for the best. Eventually the storm quieted and I slept again.

Each morning at 5 am, the Catholic Church across the road from the farm rang its bells. This was no subtle, one or two rings to mark the morning hour. Those bells rang and rang and rang, intending to wake the town. I always went back to sleep. At 6 am the Protestant Church at the other end of town (a block away) rang. These were much more modest and were quieter for being further away, still, I often heard them. Lastly, despite it having been light since at least 5 am, at 7, the rooster next door crowed, and every time, despite the earlier bells, I called him an asshole. And then I got up. Our hosts told us that they hardly noticed the bells after living near them. I didn’t believe that was possible. However, by the last few days of the residency, I couldn’t remember waking up to the 5 am bells.

My time at HARP was rejuvenating, I enjoyed the people, the horses, and the place very much. I felt alive in the world while I was there. I hope to go back sometime and see how the program evolves.